Magdalen College understands itself to be a steward of the Catholic intellectual tradition and a participant in the greater mission of the Church through its unique liberal education.  Through our immersion in and cultivation of the best of Catholic intellectual and liturgical culture, integration of faith and reason, and a collegiate ethos that is oriented to growth in Wisdom, the college seeks to grow ever more faithful to its mission. Neither triumphalist nor defensive in our posture, we–like our patron Pope Saint John Paul II–embrace the call to fidelity with joy, hope, and humility.  Together, these enable us to bring light and the call to authentic communion to the world.  We “go out into the deep” both in search of wisdom and to bring what Benedict XVI called “intellectual charity” to those most in need. Four documents, among others, are key to our identity and self-understanding as a college:

Institutionally, the college has established several practices and norms that have helped it sustain its Catholicity over time.  Though Catholic culture in part springs from the spiritual lives and practices of those who inhabit that culture at a given moment, these practices and norms offer a public witness to those both within and beyond the college of the institution’s fundamental orientation over time.  These include the following:

The creation of a Catholic culture that is conducive to the spiritual life is a complex process–one outlined in another essential document for the college, Josef Pieper’s Leisure the Basis of Culture–but these practices and norms provide the “guard rails” that stand beyond any particular person or moment in the college’s history. Within the space these provide, the college invites its members to embrace without reservation the journey toward Wisdom, the riches of the Catholic intellectual tradition, and the education of the integrated person that we offer. We seek to integrate a rich liturgical life with the great devotional traditions of the Church.  These include daily Mass, the Liturgy of the Hours, the rosary, and other devotions.

Read More About Liturgy and Prayer At Magdalen College, each student is encouraged to discern his or her vocation.  Our discernment program is under the direction of our chaplain, Fr. Roger Boucher.

Read More About the Discernment Program We offer a unique liberal education, rich opportunities to grow in faith, and a vibrant Catholic community animated by the great Catholic intellectual and cultural traditions.

Read More About the Catholic Culture “Faith and reason are like two wings on which the human spirit rises to the contemplation of truth.”–Pope Saint John Paul II

Read More About the Faith and Reason Our mission animates all that we do, providing the North Star for our pursuit of wisdom in its fullest sense.

Read More About the Mission The college welcomes visitors to all of its liturgies. Please note that the Mass schedule changes during holidays and the summer months. The liturgical cycle of the Church as a whole, but also of the college as well, reaches its pinnacle during the Paschal Triduum. It is in these days that all of our efforts combine to render to God our best gifts of beauty, beginning with sung Tenebrae on Wednesday and continuing through Maundy Thursday, Good... On this, the ninety-third birthday of Pope Emeritus Benedict XVI, we offer this essay on his inspiring vision of the ends and means of Catholic education. Today, we are in the midst of a great renewal in Catholic higher education. Colleges and universities founded after the Second Vatican Council with the intention of cultivating a...

Hope Versus Optimism in a Time of Distress

Father Richard John Neuhaus famously distinguished hope and optimism: Optimism is a matter optics, of seeing what you want to see and not seeing what you don’t want to see. Hope, on the other hand, is a Christian virtue. It is the unblinking acknowledgment of all that militates against hope, and the unrelenting refusal to... 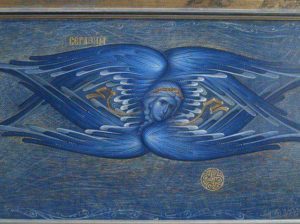 Magdalen College of the Liberal Arts is delighted to announce that students and alumni of the College have been selected to participate in an iconography workshop under the renowned iconographer George Kordis.  This extraordinary program, “Writing the Light,” will be held in Athens and Crete late this summer.   Through generous benefactors, Ms. Keri Wiederspahn, who... The following remarks were offered by one of our theology professors, Karl Cooper, at a recent conference on Wendell Berry. Pope Leo XIII’s encyclical Rerum Novarum (1891) inaugurated the modern economic age and placed the Catholic Church right in the middle of it.  The Church’s answer to the industrial revolution, Rerum Novarum describes two worlds,... In the very beginning of the Summa theologiae, Thomas explains what it means to be a theologian. He does this in one quaestio, ten articles; the whole presentation takes only seven pages in the edition I use. I predict that someday you will read it. It may not occur until you are old and find you have...