Magdalen College of the Liberal Arts > News, Events & More > Friday Night Lecture Series: “What They Saw in America: The Sacred and the Secular”

Friday, October 5, 2018, 7:30 p.m., St. Francis de Sales
Dr. James Nolan
Professor of Sociology at Williams College
Presents
“What They Saw in America: The Sacred and the Secular”
Join us in welcoming Dr. James Nolan, author of What They Saw in America: Alexis de Tocqueville, Max Weber, G.K. Chesterton, and Sayyid Qutb (Cambridge 2016), as he shares with us insights gained from his comparative study of these four authors and their journeys to the United States between 1830 and 1950. 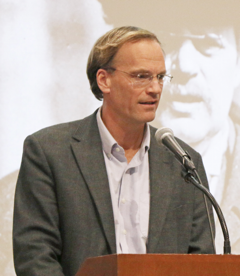 The comparative insights of these important outside observers (from both European and Middle Eastern countries) encourage sober reflection on a number of features of American culture that have persisted over time – individualism and conformism, the unique relationship between religion and capitalism, indifference toward nature, voluntarism, attitudes toward race, and imperialistic tendencies. Listening to these travelers’ views, both the ambivalent and even the more unequivocal, can help Americans better understand themselves, more fully empathize with the values of other cultures, and more deeply comprehend how the United States is perceived from the outside.
His current research project, Delivering Little Boy, is a unique look at the Manhattan Project and the early years of the nuclear age. His previous books include Legal Accents, Legal Borrowing: The International Problem-Solving Court Movement (2009); Reinventing Justice: The American Drug Court Movement (2001); and The Therapeutic State: Justifying Government at Century’s End (1998).
He is the recipient of several grants and awards including National Endowment for the Humanities fellowships and a Fulbright scholarship. He has held visiting fellowships at Oxford University, Loughborough University, and the University of Notre Dame.
___________________________________________
Northeast Catholic College
511 Kearsarge Mtn Rd
Warner, NH 03278
magdalen.edu
603-456-2656
PrevNext